What is thromboelastography and how it works in the TEM-A.

The Hartert invention is still applied today with excellent results and is supported by a massive amount of scientific literature. It consists of a cup containing a fresh sample of blood and constantly oscillating in a known repeatable arc and for a known repeatable time, so that the blood is submitted to a situation similar to that in the vascular system.

Immersing a pendulum which is suspended from a thin torsion wire, of known resistance to torsion, into the blood sample will cause the blood to act as intermediary between the oscillating cup and the pendulum: as long as the blood remains fluid and provides no linking strength, the pendulum will remain stable in its zero position, despite the oscillation of the cup, due to the resistance of the torsion wire.

But as soon as the first monomers and polymers organise to form the clot, these will create strains linking the two, of sufficient strength to overpower the resistance to torsion of the wire, and the oscillation will drag the pendulum into its course, in an arc that increases proportionally to the strength of the link.

Through an electromagnetic sensing system connected to the torsion wire, the degree of the arc in which is moving the pendulum is detected and reported continually to the display as an amplitude of a branching curve and as a percentage of the full arc of oscillation.

The result is a graph and numerics that indicate when, with which speed and to what extent the blood has clotted. The thromboelastography test will also reveal the amount of retraction and fibrinolysis of the blood sample, since any variation of the strength of the link estabilished by the blood sample is reported.

Although the original Hartert test was done with reusable cups and pins, today these parts are made of neutral disposable plastic, to eliminate the problem of possible contamination of personnel.

Fig. 1. A complete thromboelastogram looks like the one hereunder and the most important parameters measured are : R – K & a – MA – plus the lysis parameters 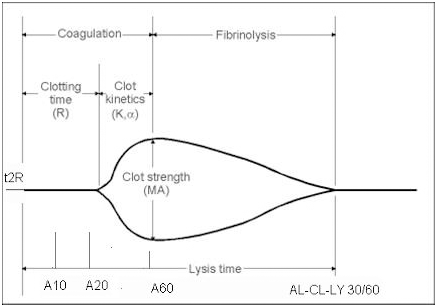 t2R – (manually entered) is the time taken to start the test from the time of drawing blood, which will allow to weight the R parameter against the pre-test time. 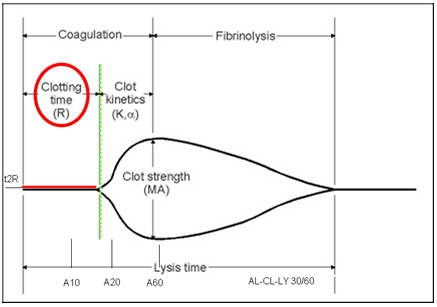 The time from Start until the initial coagulation stage, depends on the activity of thrombin, AT, and availability of fibrinogen. 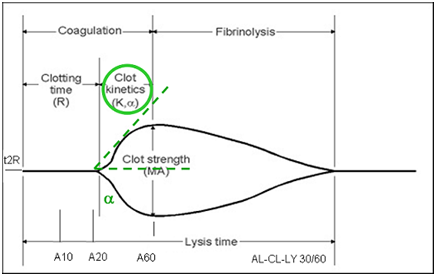 Indicate the speed of the aggregation fibrin-platelets.

Indicates the final strength of the clot, i.e. its capability to stop bleeding.

The parameters A10, A20, A60 allow to compare data based on fixed time slots.

The group of L parameters, AL-CL-LY measure the amount of lysis in various formats.